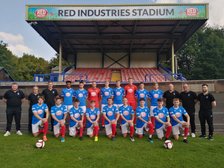 Town start with a point

It was an entertaining opening to the League campaign

It was an entertaining opening to the League campaign for both teams in a game that surprisingly produced no goals. Castle almost made a dream start but Maxwell Chimenes was denied by keeper Jonathan Hedge. A mix up at the other end saw Castle scramble the ball away. Castle went close on a couple of occasions but they had A great chance early in the second half when Ryan McLean was brought down in the box but Ethan Vale pulled the penalty wide. Sheffield had appeals for a penalty turned down as Town scrambled the ball away. Hedge then twice made good saved to keep Castle at bay. Castle caused problems down the flanks but Sheffield held form to take a point back up to Yorkshire.
Full-time Newcastle Town 0 Sheffield 0
Share via
FacebookTwitter
https://www.newcastletownfc.co
Recent news